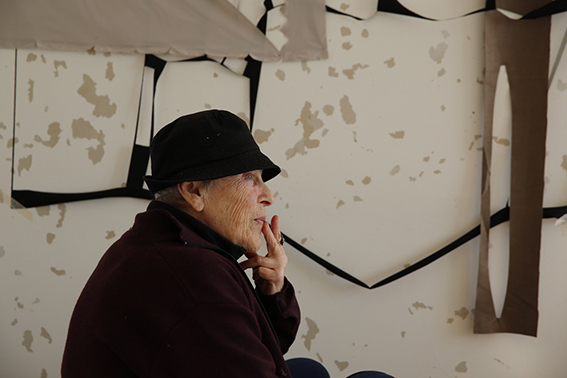 Marion Baruch, born in 1929 in Romania, has travelled through many countries and her production has taken on a variety of forms. From painting in the 1960s, to sculptures and conceptual installations in the 80s, to collective productions in Paris in the 1990s - 2000, to new works from fabric scraps created in Italy since 2012, Marion Baruch's life and work seem inseparable and unassignable.
At the centre of these crossings, the forms seem to present themselves, in gentle reserve, as fragile apparitions, or in this state of "presence-absence" as points out Noah Stolz, exhibition curator who has been accompanying the artist in her projects for almost ve years :
?The forms that animate these fragile bodies are the result of a process that crosses the entire history of humanity. Fabric is in a way the rst organized language created by humans, a language that connects imagery to gesture through a process of abstraction. The remains of the garments used by the artist are subjected to several stages of re ection. The rst come with the image that emerges from the bags provided by the garment industry. Then, the artist separates the scraps and suspends them. A ghostly form starts to appear. Marion then begins a very delicate process, manipulating the material by following what the force of gravity imposes. This process calls up several specific moments in the act of creation, but it also welcomes the spark of a memory as it lights up.
At La BF15, these fabrics summon nature while investing the space in an abstract and organic way. From the rst room which opens itself outward through its large windows, to the intimacy of the glass roof, the art centre takes on the appearance of a winter garden, inhabited by a sensitive presence.